Apartments in the Dallas-Fort Worth Area Begin to Take Off 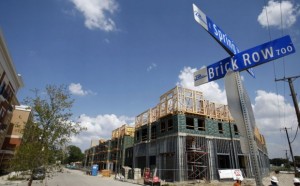 According to Vice President of apartment analyst MPF Research Greg Willett, “Construction is kicking up a little bit faster than we thought it would. My new expectation is we will start 8,000 to 10,000 units here this year.”

Recently MPF Research reported that their previous forecast for apartments in North Texas would range somewhere between 5,000 and 7,000 units in 2011. However, demand for rental homes has continued to grow. “People are not buying as many homes at this point, given what’s going on there in the market,” Willett stated.

During the first quarter of 2011, landlords leased an additional 1,750 units in the Dallas-Fort Worth area. This pushed vacancy rates to below 9% and rents were up almost 3% from just a year ago to an average of $770.

Willett has said that apartment landlords have focused more on keeping tenants while ratcheting up monthly rates. “Operators had to focus their attention on resident retention among a group of renters vulnerable to pricing sticker shock at renewal time,” he stated.

In the newer, high-end apartments built in such markets as Plano, Las Colinas and Frisco, vacancy rates are only 5% or less, according to studies by MPF Research. Nearly 5,000 apartments are under construction in the Dallas-Fort Worth area, as well as 20 projects which have begun in the last six months. But, according to Willett, most of the apartment developments getting under way are smaller than ones from previous years.

According to Willett, “Financing sources are willing to green-light new apartment projects in North Texas, but you can tell we’re not quite back to business as usual by the comparatively small sizes of most of the properties getting started.”

Apartment construction continues to remain well below where it was when the market was at its peak in 2009. At that time, more than 18,000 units opened.

*For more information on technology rentals in Fort Worth visit our Fort Worth Computer / Audio Visual / And Office Equipment Rental Page!